The Sonic Teenage Deterrent Is A Bold Attempt To Tackle The Problems Of Youth, But A Holiday On Gruinard Is More Efficient 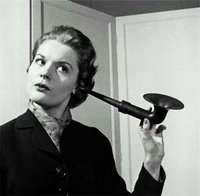 I was intrigued to hear, on Radio 4's splendid PM programme, of an invention which deters teenagers from gathering outside fish bars and late night corner shops. Intrigued, partly, because the story was reported in The Grocer last autumn, and has - I am reliably informed - been tested on daytime television's Richard and Judy.
Nevertheless, there is something appealing about the Mosquito, or Sonic Teenage Deterrent, manufactured by Compound Security Systems of Merthyr Tydfil. It emits a high-pitched sound which is inaudible to anyone over the age of 20, though unsporting academics have suggested that some older people may still be able to detect the din.
I am, of course, in favour of anything that discourages the formation of mobs of yobs outside fast food establishments in general (and Big Eb's Chippy in particular), but I remain uneasy about the introduction of further noise pollution into the urban environment. Even when wearing wax ear-plugs, muffs, and a trapper's hat with sheepskin flaps, I can detect the distant symphony of car alarms and bus engines and the Grand Prix whine of the overpowered saloons gliding up the A72 to the bantustans of executive housing. I hear the neighbours' telly, and the shouting over tea-trays from Tenerife as the baby's cries are drowned by Mr Eric Spear's mournful Coronation Street theme. At night, as I think of waves and peaceful beaches, I catch their breaths and their saturnine moaning without the need for an Esso tumbler pressed hard to the anaglypta. Then I absord the human percussion of the all-night drinkers shouting and fighting and singing that song they sing about time taking a cigarette. And just as I drop off, exhausted to the point of death, I hear the sirens: of ambulances (mashed heads); fire engines (chip pan infernos); or Z-Cars going softly, softly into the good night. I hear the urban foxes barking, and the depleted dawn chorus, and the milkman crying as his electric car glides towards oblivion. I hear the postman checking the mail for loose change. And then, just as the ferryman of deep sleep beckons, I awake with a start to the sound of the Radio Four UK Theme - the drunken sailor and the National Front - and the strange but sturdy crash of the Roberts radio as it bounces on the bedroom wall.
If I can hear all of this, I fear that I will hear the teenage repellent as well. Which leads me back to my original conclusion. The Mosquito, like the playing of Haydn and Mozart on the Tyne and Wear Metro, is a bold attempt to deal with a nasty problem. But it is less effective than encouraging young people to grow up and get a job or, failing that, sending them to "find themselves" on the island of Gruinard.
Posted by Kirk Elder at 9:01 PM

Absolutely brilliant - thanks for bringing a smile to a like minded fellow traveller...