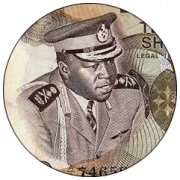 Many aspects of Mr Tommy Sheridan's theatrical triumph continue to puzzle me, but above all I am baffled his use of the phrase "as dodgy as a ten bob note" to describe the minute of the meeting at which he did, or did not, admit to visiting what my mother, Mrs Elder (or Ma'am) would have called "a den of iniquity" in Manchester.
Mr Sheridan is old enough to remember decimalisation, and will thus be aware that until its withdrawal in 1969 the ten bob note (pictured here, with the Ugandan president Idi Amin) was a perfectly respectable item of currency, with a value of fifty of your new pence.
True, in the matter of money, as in law, everything is interpretation, and it is my understanding that no banknote of any denomination is legal tender in Scotland. There is also, in history, a seven-bob note - the seven shilling bills which were issued by the Ballindalloch Cotton Works in 1830, three of which were redeemable for a guinea.
But this is pedantry. In the language of cliche - a currency in which Mr Sheridan may be considered a millionaire - a nine-bob note is "dodgy", while ten-bob is bankable, sound, and reliable in every way.
Posted by Kirk Elder at 11:21 AM

Say what you will about That Idi Amin, he was always very well turned out and cut a dash in a uniform. Perhaps if Mr Sheridan was to adopt similar martial dress from now on he might rise to high station, though few uniform colours would match such an orange coupon.

As an NCO in the King's African Rifles, Amin doubtless possessed a degree of marksmanship which was at least the equal of the Pollok pillock's Marxmanship.