Tis The Season To Be Merry, So Pardon Me If I Respond To The Gaiety Of The Season By Hiding In The Wardrobe 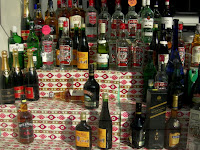 I for one am filled with wondrous joy at your missive from Peebles, that jewel amongst municipal areas. Good health to you, and may your hot water bottles remain eternal warm.

The spirit of Calvin may be fine for you. I take the view popularised by Calvin's less sanguine partner, Hobbes, that life is, like, Trotsky, viz., nasty, brutish and short.

Of course, you have to be fast on your feet to outrun a determined icepick wielder in Mexico, so perhaps little Bronstein should have improved upon his act of Jewish crypsis and styled himself Gallopski.