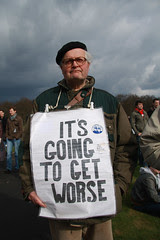 Firstly, an apology. I have been absent from these pages too long. I offer no excuses for my absence. I was in a blue funk and had nothing constructive to say, so decided to adhere to a maxim passed on to me by my mother, Mrs Elder (or Ma'am). Perhaps in deference to the wartime propaganda posters about loose lips and sinking ships which decorated the pantry, she was an advocate of eloquent silence. "Chatter," she used to say, "is the diarrhea of a constipated mind." (Generally, as a cure for this unpleasant condition, she prescribed fig rolls, before meals, until the bloating abated).
My absence has coincided with the event known by the BBC as "The Downturn", and which was previously known by the much friendlier cognomen, "the credit crunch".
'Credit crunch' sounded, I always thought, like the kind of breakfast cereal Sir Chris Hoy might have eaten before pedalling a Moulton Mini around the lower slopes of Mount Everest, and as a metaphor it was of limited use to those us who have always abhorred money-lending, share-dealing, or any of the forms of licensed gambling which have kept the whinnying nitwits of the Stock Market in Champagne baths while the rest of us have us been left to compute the rising cost a sliced pan loaf. I have neither a borrower nor a lender been yet, for some reason, I am being invited to enjoy the unpleasant side-effects of everyone else's economic incontinence. How this happened under the watch of the Prime Minister (nee "The Iron Chancellor") Mr Gordon Brown, I am unable to say.
So now we have a "Downturn". I am no economist, but the technical explanation of this state of affairs appears to be roughly as follows: the bankers encouraged people who couldn't afford it to take out loans in order to buy things they didn't need, to the extent that their banks had to behave in the same way, borrowing non-existent money from each other and paying themselves monstrous bonuses as a reward for their economic perspicacity. This was cowboy economics, except that the men in the black hats who were robbing the stage coach were the bank managers themselves.
That, of course, is all in the past. The downturn, which is sometimes known as "the recession", occasionally as "the slump" or "the depression", has become an almost meteorological state. There is no other game in town.
And yet, these days do not feel so bad. The supermarkets are still crammed with unnecessary products, and young men still have the wherewithall to fortify their stomachs with communion wine every night. The gutters run with spew just as quickly as they did in the boom years, and the pavements remain sticky with Juicy Fruit. The bust is much like the boom. (Hemlines, it's true, are rising, which is said to be a bellwether of grim times, but this is a hardship that we must learn to bear.)
Stoicism is required. Fortunately I have plenty. I keep it in the coal hole, next to the emergency rations of Marvel and Spam.
Posted by Kirk Elder at 6:37 PM

Mr Elder, Sir,
My I be first to express my unreserved Joy - normally a consequence of drinking Rose Hip Syrup - at your return to watchful, wary examination of the poor times into which we have fallen.

At the tender age of 51, i consider myself well on the way to Major Buftyism, and I confess that my ability to recognise many of the references made in your recent piece left me eerily uneasy.

Lang may the Showboaters Float!!

It can only get worse.

P.S. Has anyone ever advised you / The Peebles Showboaters, that there is a useful Fring Production waiting to be unveiled?

Mr, or, indeed, Ms Anonymous,
Thank you for your kind encouragement. The infernal superhighway can be a lonely place, and I am often minded to ignore it and concentrate on the shadows over the lum instead. However, in the knowledge that I have perhaps dozens of readers, I will attempt to carry on.
The Showboaters have performed in various Off-off Fringe productions - and I would like to find a place there for a more intimate show. However, I am aware that my idea - one man and his teapot - is a long way from modishness.

Mr Elder, Sir,
I have the singular honour to be Mr Anonymous, although I understood that I had applied to be known under the style and title of Disorganised Criminal.

Have no fear, Sir, you will not be found one morning lying bound and gagged in the Offices of the Peebles Showboaters along with Mrs Townsend (of whom I understand there is ill-informed speculation), with the safe door ajar. Rather, I am with the Cowboys as opposed to the Indians I habitually prosecute. (Awful liars Criminals, don't you think?).

For all that, as long as there is an odd bob or two in the Showboaters Biscuit Tin, you must not be deterred from seeking your destiny by lack of being "out there". How could Mr McCall-Smith's "No 42 Socttish Ladies Detective Agency" have achieved prominence in "The Hootsmon" but for its sheer persistence.

I appreciate that there must be some bowing to modernity - might your bunnet be sponsored in the interest of preventing Mr Burdett- Coutts trousers from becoming a complete conflagration. It may be too late to save this year's Fringe, but might the Showboaters be minded to initiate a "Work in progress"?

Perhaps you might persuade Mrs Townsend to form part of a small Steering Group?

Mrs Elder's wartime maxim reminded me of my father's stern admonition when, at the age of five or thereabouts, I dropped my sixpence worth of properly salted french fries as we exited a 'fish bar'.

"Loose grips sink chips", said he, before we popped inside to replace the strewn delights.

May I point out that I have no connection whatsoever to the imposter calling himself Anonymous, and his poor line in Jokes. May his next heckly Buicuit go where the Sun does not habitually shine!!

Mr Anonymous,
I understand that there are others trading in anonymity, but none are as anonymous as your good self.