Mr Alastair Campbell Is Not A Crocodile, But That Does Not Make His Tears Any Less Intimidating 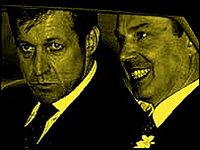 Without wishing to cast asparagus on the motives of Mr Alastair Campbell and Mr David Blunkett - fine former public servants both - I am a little disturbed that both of them have gone on record as recovering depressives. A cynic, which I am not, might find a link between their "confessions" and the success, in the opinion polls, of Mr David Cameron's Sunshine Party. In the twisted morality of the times, saying sorry is bettter than being right, and weakness is seen as a form of strength.
Of the two men, Mr Blunkett is the most deserving of sympathy. He was played for a chump by an unscrupulous lady, and then had to suffer the indignity of being the subject of a play by Mr Toby Young, a writer whose success is built on his ability to fail consistently.
Mr Campbell's confession was less expected, and hence more startling. Mr Campbell confessed that he had sometimes been unable to carry out his duties, which comprised mostly of intimidating the journalists who inhabit the Lobby. If they noticed these lapses, the Lobbyists failed to mention it, perhaps because they were feeling a little browbeaten themselves.
One trusts that those poor souls who suffer from mental disquiet will have been cheered by the entry to their number of Messrs Blunkett and Campbell. But, however ungracious it may be, I harbour a doubt. Is it not the case that depression is becoming a fashionable condition? It is hardly possible to open a newspaper these days without reading of a pop singer or a politician whose brilliant life has been clouded by a murky sense of self-doubt.
Such behaviour is a modern aberration. There have always been "dafties", of course, and one must wish them the best whilst measuring them for soft shoes to help them tiptoe unnoticed through life. But this recent fashion for depression is not an illness at all, but a cry for attention. My mother, Mrs Elder (or Ma'am) took a North Korean approach to "blue moods". She carried on regardless, laying waste to everything in her path, harvesting good cheer from her ability to turn her sense of adversity into the submission and compliance of others. It's true, she often cried herself to sleep, but - as she often said - "warm tears are cheaper than Ovaltine".
Incidentally, am I the only person to have observed a link between Mr David Cameron and the situation comedy, The Fall And Rise Of Mr Reginald Perrin? Mr Perrin, as played by Mr Leonard Rossiter, worked for Sunshine Desserts, a metaphor for pointless toil. I imagine, CJ, the fearsome MD whose office furniture was designed to break wind whenever an underling sat in it, would have approved of Master Cameron's rallying call: "Let the sunshine win!"
Posted by Kirk Elder at 3:52 PM

I feel left out, being unwilling to stagger after and leap on to any of the recent bandwagons named "depression", "ADD", "Dyslexia" and "sex addiction" and suchlike. It is not that I have never been fed up, lost track of a conversation mid way through, been fended off Mrs Jackson with a stout stick after insisting on my meat-and-two-veg on occasions not my birthday, nor for that matter mis-spelt my own name under duress. But I prefer to stick to the old-fashioned notion that some people are merely stupid rather than ill. I would have liked a yellow badge for easy parking at Tesco, mind