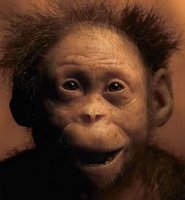 I was disturbed, this morning, to open my newspaper and find an image of myself staring back. For a moment I assumed that my tireless work for the community had been recognised, and I was being ennobled. But then I remembered that I had never met Lord Levy, and have never been in a position to lend a political party several million pounds. Nor, I regret to say, have I ever been offered a "bung", though I suspect these are less common in the world of competitive amateur theatrics than they appear to be in Association Football.
It's true, my eyesight is not what it was, and I may soon be forced to pay a visit to the Penny Arcade for a pair of reading glasses. On closer inspection, the picture in the paper was not my reflection. It was an artist's impression of an ape-girl from three million years ago, whose skeleton has been uncovered in Ethiopia. The "ape girl" features on the cover of National Geographic magazine, and provides a useful corrective to the airbrushed models one finds on less thoughtful publications. Australopithecus afarensis is not bonny, but she has pluck.
But, still, I am cautious about the veracity of this remarkable story. A few months ago, the remains of a "Hobbit" were found, but these have now been discredited, both on scientific grounds, and on the basis that - whatever one may think about Mr Charles Darwin and the evolution of species - it is unlikely that it occurred in a manner which could be explained with precise reference to the popular cinema of the early 21st century.
In truth, now that I look more closely, the ape girl seems less remarkable. I have come across many such anthropological oddities without digging a hole in the barren sands of Ethiopia. Indeed, a bus through Dalkeith usually does the trick.
Posted by Kirk Elder at 11:22 AM

It is with growing concern that I regard the rail link between the areas south of the Great Road, or bypass as some call it, and Edinburgh. It is one of my great fears that one day there may be a rail link between Morningside and Dalkeith and such ... persons will more easily be able to lower the tone of my the local tea rooms.

National Geographic's cover girl was created and placed in Ethiopia a month ago by God in order to test Tony Blair's faith.

In support of Mr Elder's theory, I am 100 per cent sure the aforementioned photograph is actually of the size and pose required to enable the owner to obtain a bus pass. The ape lady is, I think, legally entitled to travel between Edinburgh and Dalkeith every day at non-peak times.