The New Editor Of The Scotsman Is That Saucy Wee Bauchle, Lulu (Slight Exaggeration) 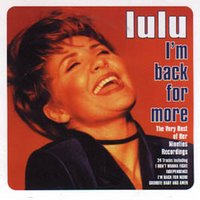 Recently, the pop singer Mr Bono of U2 was allowed to edit The Independent, and commissioned the artist Mr Damien Hirst to design a front page publicising the fact that there was no news in the paper. This was a radical step, but quite in keeping with the idiosyncratic approach of that newspaper.
Inspired by this, and by the continued editorial vacancy at the Scotsman, this site has been running a poll asking which pop star should be allowed to edit that paper.
The results were surprising. Ms Marie Lawrie, otherwise known as Lulu, topped the poll, which may be worrying for Scotsman journalists of a certain vintage, who have an irrational fear of diminutive women. However, I think Ms Lawrie has the best voice of the contestants, and a newspaper needs a strong voice. The results were:
Lulu - 28%
Sheena Easton - 26%
Alex Kapranos - 24%
Johnny Beattie - 21%
Pat Kane - 2%
Posted by Kirk Elder at 4:41 PM

And where was the Jimmy Krankie option ?

Pat Kane was the only one who had any newspaper experience, and yet he finished last. Why?

When I heard that a tiny lady was to take the woodwormed helm of SS Hootsmon I trembled and had a flashback to the last tiny lady, whose exploits were even more outragous than the outrageous gossip would claim. My favourite was when the tiny lady was shown a (finished) feature on visitors to a remote Scottish island, and the (very large) photograph showed not the tanned, teenaged beautiful visitors she had imagined, but actual Scottish people. With cagoules. "What?" she shrieked. "Are we saying "If you're old and ugly, read the Scotsman? Are we?" The feature is yet to be placed, though the tiny lady herself is long gone.

Dear Mr Elder, perhaps the Peebles abacus has an odd number of counters, but it appears 101% of people voted. Or was the vote snaffled by a Ferrero Rocher...?

There may have been some Floridan activities, but the result stands.